So last weekend I got the opportunity for the second year in a row to come to Uppsala and tie at the “Sportfiskedagen” at Möller bil. Main organizer of this even is Niklas Dahlin, a friend of mine who also was with us to the US and has his main specialty in tying Catskill style flies.

The even is a great little show, hosted in this big car sales hall it attracts surprisingly many visitors. But with the line up there it is maybe not that surprising after all, some of the most well known as well as up and comming fly fishing profiles were there. There was a 8 man strong fly tying row, or rather seven men and one woman since Jeanette Linnarud was there tying great flies too! What was extra exciting was that Niklas had managed to get Steve Cooper there, if you don’t know him he owns one of the best business in skins and feathers in Europe; Cookshill Fly tying materials. Steve is also the one who organize the Brittish Fly fair every year, but this time he was there tying some really nice winged wet flies as well as showcasing some very nice feather skins.

All in all it was a great day, I even managed to get caught on this photo that my friend Marc Fauvet shoot of me while zapping the Bug Bond on one of those Still got the blues for you baitfish flies. 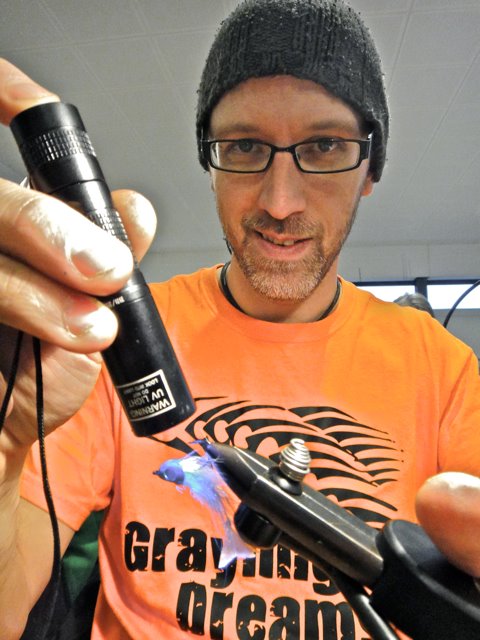 Fly fishing, fly tying, family and going your own way; the way of the fly. END_OF_DOCUMENT_TOKEN_TO_BE_REPLACED
This entry was posted on Sunday, December 18th, 2011 at 08:31 and posted in Shows and demos. You can follow any responses to this entry through the RSS 2.0 feed.
« Gary Borger book project
It’s not slow »